tainadu
About the major Kannada newspaper published from Bangalore during the freedom struggle, also its founder Sri P.R.Ramaiya and his family.Most of the people of that era are no more.So this is about A little bit of history here and there and also of old Bangalore.We hope to have frequent addtions to these blogs. Pl comment/add if you know about the paper or the family. If interested,you can also look at the blogs in lordoftheuniverse@blogspot.com (maintained by P.R.Vishwanath)Piks can be enlarged for proper viewing

Another spelling used is P.R.RAMAIAH

This is about a major newspaper in Kannada from Bangalore during the Indian freedom struggle and also about the founder P.R.Ramaiya.Request help/comments from people with info related to either the paper or the family. (Enlarge Piks to view them),The posts may keep getting reconstructed often. Pl see the other blogs - about the tainadu family. If interested Pl visit my other blogs here and at Lordoftheuniverse@blogspot.com (P.R.Vishwanath) 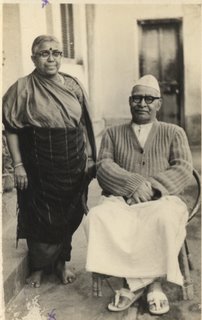 
(1) Palahalli .R.Ramaiya
and P.R. Jayalakshamma
(Anna and Akkamma)
Sri Ramaiya (1894-1970) was the founder of Tainadu, the premier Kannada Newspaper of the Mysore state during the freedom movement. The newspaper ran for more than 25 years under his leadership. It can be said that the newspaper with its simple language instilled reading habits in the people of the state. It was also at the forefront of the freedom struggle. He was also the editor of Daily News, an evening newspaper in English from Bangalore for about a decade. There will be more about the newwspaper in the other blogs.
Sri Ramaiya was one of the first members of the Indian National Congress in Mysore. He was associated with Bangalore municipality for quite some time. He contested successfully for the MLA seat from Basavanagudi from the Congress party in the first ever general elections in 1952 . He was a MLA from 1952-1957. 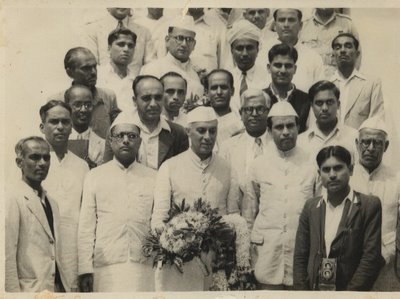 The photograph on the left shows PAndit Jawaharlal Nehru in a reception given by Bangalore journalists. This was taken probably in the early 1950s. Front two rows :
Vyasa Rao, Ramaswamy(Hindu),Venkoba Rao (Vishwakarnataka),K.C.Reddy (CM, Mysore) Nehru, not known, Hanumantahiya (future CM),not known, Sagar (Photographer),P.R.Ramaiya. Some other journalists like Jayasheela Rao of Prajavani also can be seen

Smt P.R.Jayalakshamma (1908 -1991) , also known as Akkamma, was a well known social worker of the state of Karnataka. She was the vice chairman of the Social welfare board for quite some time. She was closely associated with several welfare organizations like the Abalashrama, Ashakta Poshaka sabha etc. In her last years she ran the school and orphanage started by the Gokulam educational society.She was also a member of the congress party and later the Janata party. She represented jayanagar constituency as a corporator during the late ' 50s and early' 60s. She was also the Deputy mayor of Bangalore during 1963-1964. 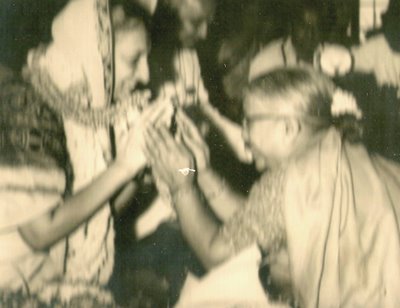 The Photo on the right was probably taken in ~1969 at the AICC convnetion in Bangalore (LAl Bagh). This is just before the split in congress. Picture shows Smt Indira Gandhi and Smt P.R.Jayalakshamma. Sri S,Nijalingappa , CM Mysore and the future head of ' Old Congress ' also seen in the picture.
(Pl see other posts on this blog
for more on Smt. P.R.Jayalakshamma) 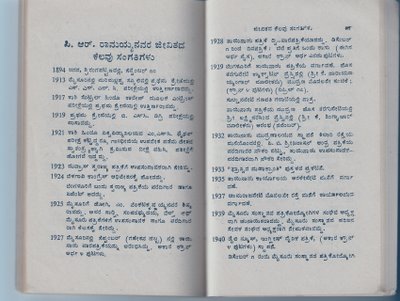 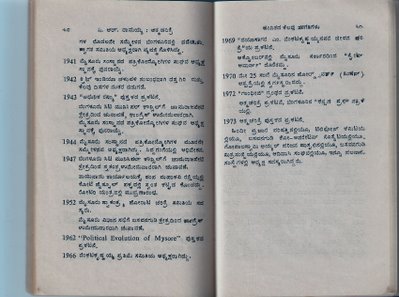 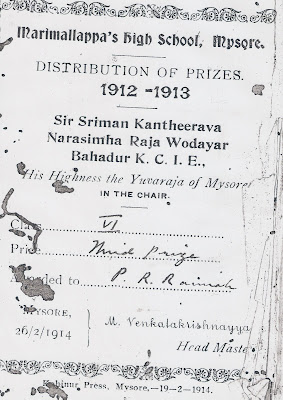 .He completed his B.Sc in 1919 and went on to do M.Sc in Chemistry. However, he was influenced by Gandhiji and paid heed to his plea that students enrolled in institutions aided by the British should forego their studies. Therefore he did not take the M.Sc (final) exam which was due in 1921. He came back to Karnataka. Following is his signature on a book of Organic Chemistry: 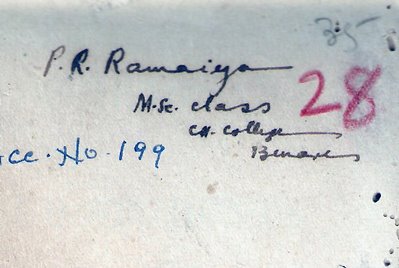 (1) He had met Gandhiji for the first time in Benares when he told him about his decision to come out of BHU.
(2) In 1927 he again met Gandhiji. Following is his account of the meeting 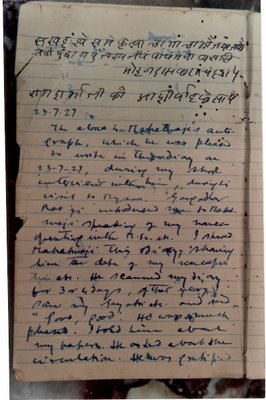 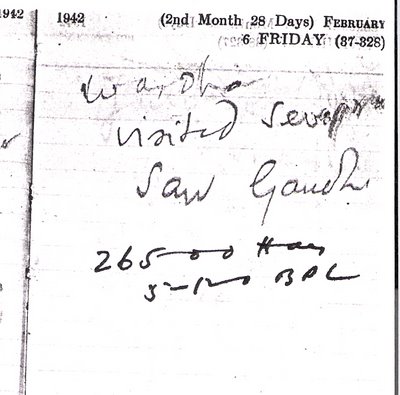 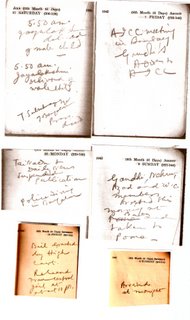 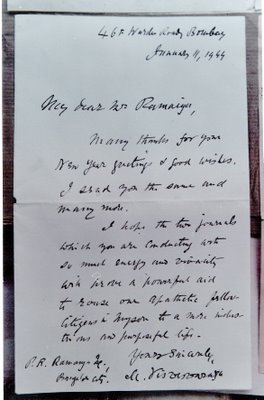 Feb 1944
The letter, written from Bombay , addressed to sri P.R.Ramaiya says
... I HOPE THE TWO JOURNALS WHICH YOU ARE CONDUCTING WITH SO MUCH ENERGY AND VIVACITY WILL PROVE A POWERFUL AID TO ROUSE OUR APATHETIC FELLOW CITIZENS IN MYSORE TO A MORE INDUSTRIOUS AND PURPOSEFUL LIFE ..


(2) With Sri Jayachamaraja Wodeyar, the Maharaja of Mysore ( better pik will be put soon) 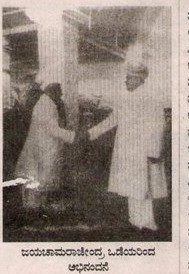 FIRST GENERAL ELECTIONS -1952 BASAVANAGUDI CONSTITUTENCY
18296 people voted out of which Sri P.R.Ramaiya (Indian National Congress) got 10003 votes. He was opposed by representatives of SP, Jan Sangh and KMP etc. The next runner up was the candidate from SP. Below is an excerpt taken from the records of Election Commission of India 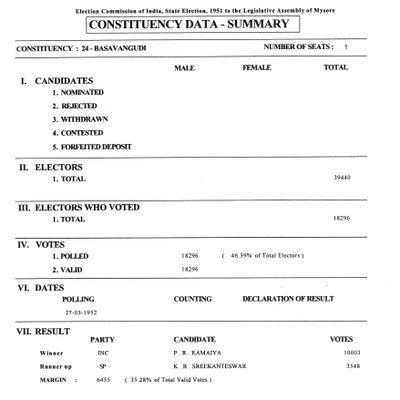 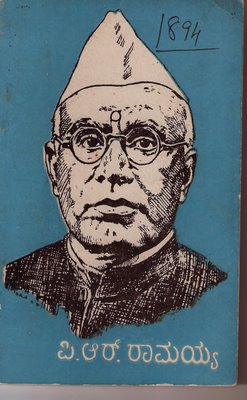 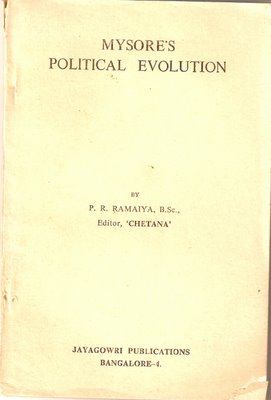 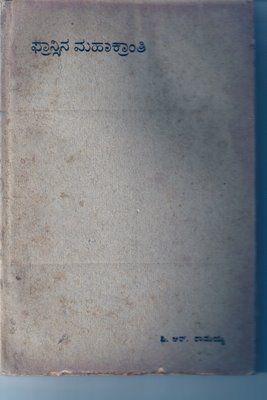 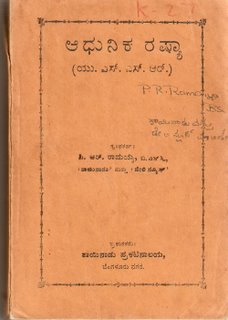 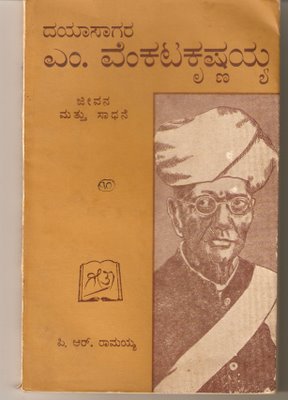 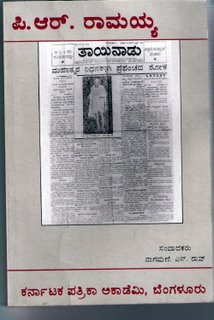 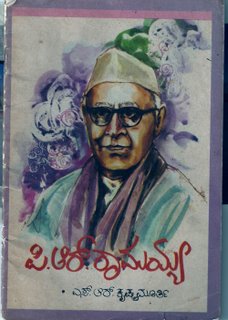 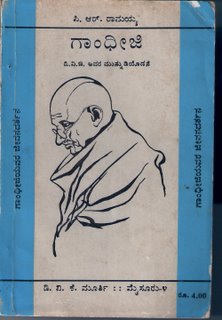 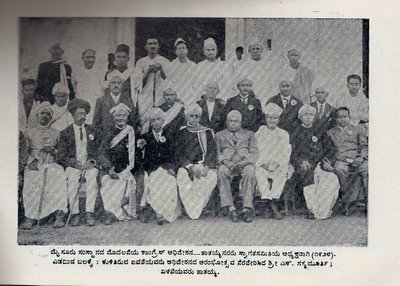 
(2) This is the 1st Mysore State journalists association meeting (1932) to honour Sri Venkatakrishnayya ; Some of the people who could be identified : Last row standing
(from left) T.T.Sharma, P.R.Ramaiya,NK,NK,Nk,P.B.Srinivasan,NK,NK,; Mid row (on chairs) 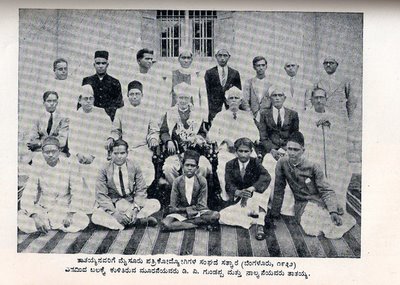 (NK - not known Will try to fill in later) 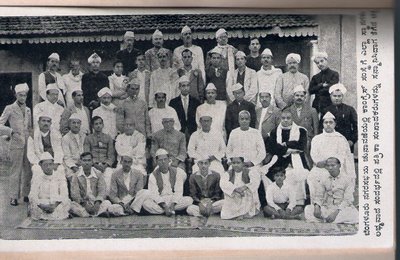 This is in 1946 - a meeting attended by Mysore state journalists and several congressmen
.People who could be identified:
Sitting on chair - From left :NK,NK,P.B.Srinivasan, T.T.Sharma,P.R.Ramaiya, K.T.Bhashyam, NK,NK, K.C.Reddy

My father late A. Keshav was a staff reporter with Tainadu and a freedom fighter.